COVID-19 Vaccinations Recommended for Children Aged 5 and Up

Official websites use .gov
A .gov website belongs to an official government organization in the United States.

Children’s access to health insurance in the United States has improved dramatically over the past two decades. Driven largely by the availability of public health insurance provided through Medicaid and the Children’s Health Insurance Program (CHIP), the rate of uninsurance among children has dropped from about 15 percent in 1997 to 5 percent in 2017 (Bennefield 1998; U.S. Census Bureau 2018).

Despite this progress, as of 2017, nearly 4 million children were uninsured (U.S. Census Bureau 2018). In particular, more work is needed to find and enroll harder-to-reach populations, especially American Indian/Alaskan Native (AI/AN) children. Although they too have benefited from the expanded availability of public health coverage, 8 percent of AI/AN children were uninsured in 2016, nearly double the rate of uninsurance for all children in the United States that year (Haley et al. 2018). Better access to high-quality health insurance and health care could help address diabetes, chronic liver disease, heart disease, and other illnesses that are more common in AI/AN populations than other population groups in the United States (Center for Medicaid & CHIP Services 2016).

To reach, enroll, and retain more children in Medicaid and CHIP, the Centers for Medicare & Medicaid Services (CMS) launched the Connecting Kids to Coverage (CKC) National Campaign and Grants Program in 2009. These initiatives have three primary goals:

Beginning in 2010, CMS launched a CKC grant program focused on enhancing outreach and enrollment support for AI/AN children. To date, CMS has awarded three rounds of Tribal outreach grants to AI/AN organizations and made available $10 million in the first round, $4 million in the second round, and $4 million in the third round (InsureKidsNow.gov 2017).

CMS contracted with Mathematica Policy Research to evaluate and report on grantees’ performance, and to provide technical assistance to help support grantees. This evaluation summary describes the first-year experiences of the eight Round III cooperative agreements with AI/AN organizations (Figure 1). It is based on a review of grantees’ progress reports covering the first year of their two-year grants, July 2017 through June 2018.

Many families benefited from grantees’ efforts during the first year of Round III grants:

Figure 1. Characteristics of Round III grantees

Source: Mathematica’s analysis of grantees’ semiannual reports for the period July 1, 2017, to June 30, 2018, as well as grant application materials.

Round III grantees engaged in a number of activities to help AI/AN children and families enroll or renew coverage: 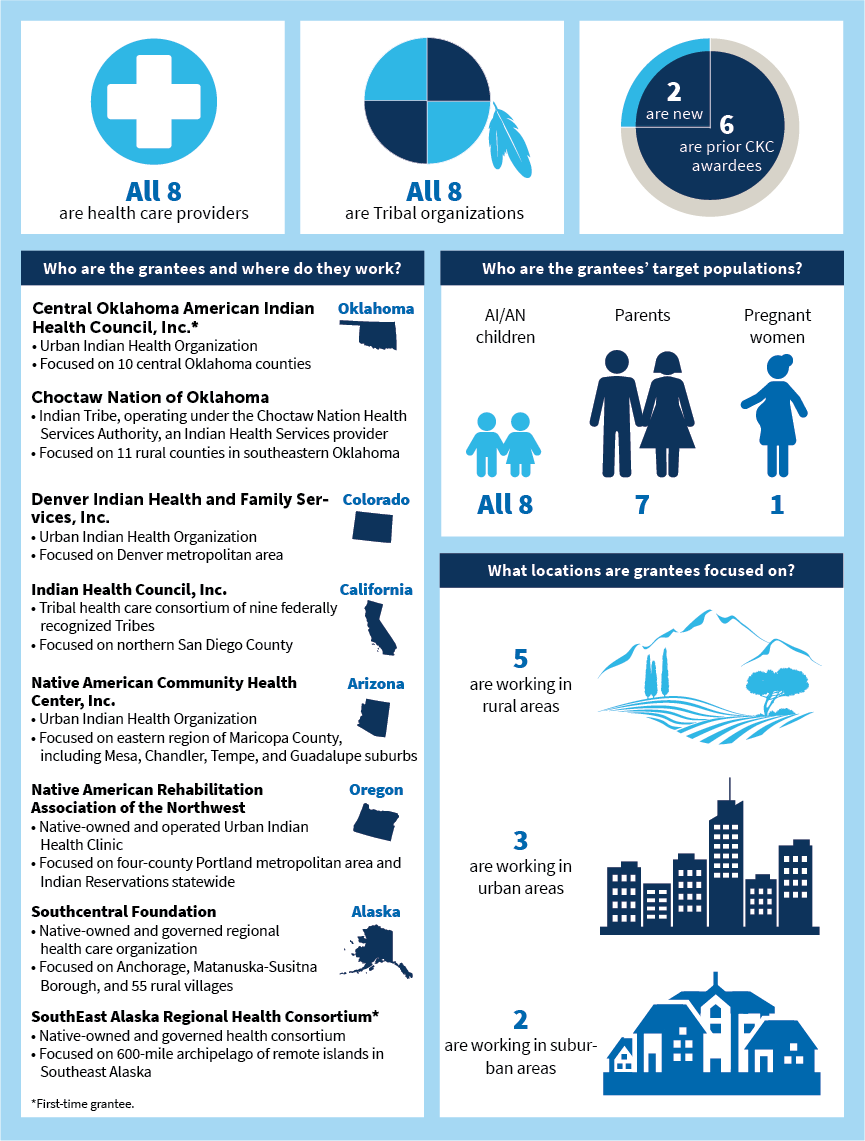